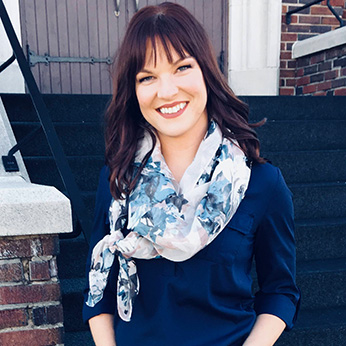 Posted at 16:47h in Dance Instructors by command

Kelsey Freidel Nelson started dancing in high school where she was both cheer and dance captain her junior and senior years. She danced for four years in college at Augustana University and the University of South Dakota. During that time, she choreographed for the teams and attended four national championships. In April 2008, her team took first place at the West Coast Championships in Los Angeles, CA in the college hip hop division, and second place in the Jazz division.

After college, Kelsey’s love of dance transitioned into coaching and teaching. She has aided in coaching and choreography for the USD Dance team, she was the sideline cheer coach at St Thomas More High School, was the assistant dance coach/choreographer at Vermillion High School, and started the inaugural Cheer and Dance program at Mount Marty University. Likewise, she has been a certified SDHSAA Cheer and Dance Official since 2011. She was voted the 2015-2016 NFHS South Dakota Competitive Spirit Squads Official of the Year. In 2015, Kelsey became a dance instructor at Balleranea Dance Studio, and was the competition team coach from 2014-2017. Over the years, she has also choreographed performance dance team pieces for VADO.

She continues to study dance and has taken classes at Balleraena for eight years. She was a company member of the LiRa Dance and Theatre Company of Sioux Falls for five years. On top of teaching, judging, and coaching dance – Kelsey is the AVP for Partner Engagement at Ruffalo Noel Levitz. She lives in Vermillion, SD with her husband Joey Nelson and dog, Libby, cat Murphy, and one year old son, Vik.